Lee Kizer is 93 years old and was born in Julesburg, Colorado. He attended school in Julesburg at a school building which was three stories tall. On the first story was the grammar school. The second story was for the middle school. High school was taught on the third floor. Lee's father was also born in Julesburg. His grandparents came to Julesburg with the Union Pacific in the 1860s.

As a teenager Lee helped the janitor at the high school. Since it was during the depression, there was no money to pay Lee, so he was paid with copies of old photographs which the janitor had in a dark room at the school. The photographs date from the very inception of Julesburg. They represent a complete history of the city.

During World War II, Lee joined the Navy and served aboard a ship in the South Pacific. That ship survived a Kamikaze attack the South China Sea. At the end of the war Lee attended a party in Hawaii, hosted by Life magazine. Lee was one of many sailors attending the party and Life arranged  dates for the sailors. At the luau, hosted by Life, a photograph was taken of the girls and the sailors. When Lee saw the magazine he asked his mother to buy it and to save a copy because he was in 2 of the photos. That magazine also features other photos of the end of the war. One of them is a famous picture of the sailor kissing a nurse in Times Square. Lee showed us the magazine and the page with the photo of the sailors at the luau as well as the page with the famous photo. Lee hasn't changed all that much despite the passage and seventy years.


After the war Lee returned to Julesburg and opened  a barbershop on Main Street. At some point after that his mother mentioned to him that he should find some place to display all of his historic photographs. At about this same time Ford dealership had moved from its location where the Old Ford Garage stands to a new location. When the property became available, Lee purchased it. It provided a place for his historic photographs of Julesburg and eventually a place to house his barbershop which he moved from Main Street.
Lee rehabilitated the building and used it to display his photographs and, at about the same time, he became interested in antique automobiles. The first automobile he purchased was a 1912 Buick. That Buick is still on display in the garage in its unrestored, yet near perfect condition. It is remarkable to view.

Lee also has collected gas pumps and signs from garages in and around Julesburg. He is also collected a number of roadsigns, including antique Lincoln Highway signs and signposts which are on display in the garage.
When we finished viewing the garage, Lee invited us to go next door and upstairs to his old "dance hall". The dance hall is a tribute to the American Military in World War II. There is a bandstand featuring instruments of World War II veterans from Julesburg and background music played of the big band era. 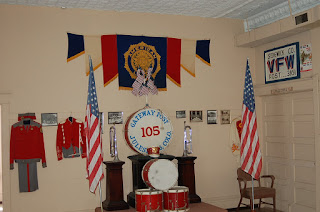 It was hard to tear ourselves away from this delightful diversion from our Lincoln Highway trip. However, in one sense it was not really a diversion. It enriched our understanding of the highway and the historic times which serve as a backdrop for the Highway.
We are meeting many people on the Highway who are knowledgeable in its history and are quietly working to preserve it. Lee Kizer is just going the extra measure. 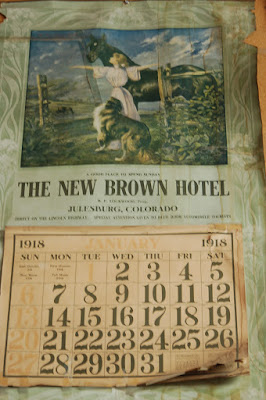 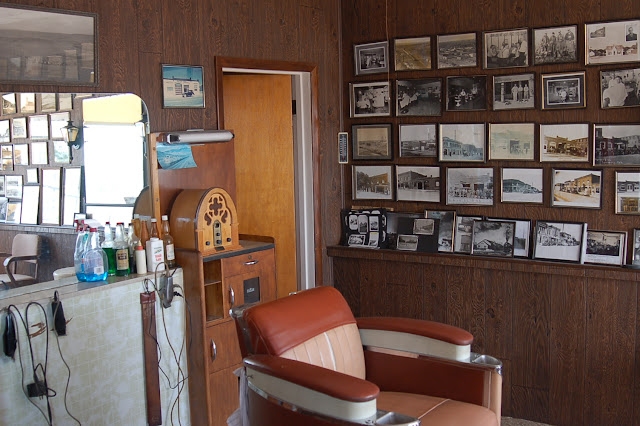